Survival isn’t always about being the strongest, the smartest, or the purest.   It doesn’t always hinge on you knowing exactly what to do when it looks like death is about to dance all over your soon-to-be corpse.

Sometimes it’s about knowing what NOT to do.

Every horror film you’ve ever seen makes it plain – if you proceed in a particular manner, or adopt a certain mindset, you are guaranteed to be the first to die in ways that would make an undertaker vomit.  Forget the dumb ass who wanders into some abandoned murder house or insists on taking that midnight stroll in spite of all the mysterious disappearances around town.  The first rule of horror should be that no movie can even get started without the complete abdication of common sense.  That said, if you would like to see the dawning of another day, or at least hold out until help arrives, it would behoove you NOT to do the following:

Know who is almost always the second or third guy that gets pureed?  The Skeptic.  The guy who steadfastly refuses to believe what is happening around him, IN SPITE OF ALL THE EVIDENCE IN FRONT OF HIS EYES.  This asshole could (and most likely will) watch his best buddy get lunched on by some zombie geek, die, stand back up, look at him like he’s the next entrée on the menu, and still refuse to believe it’s happening.  You can’t deal with the problem if you refuse to recognize the problem.  Open your mind or the casket at your viewing will be closed. 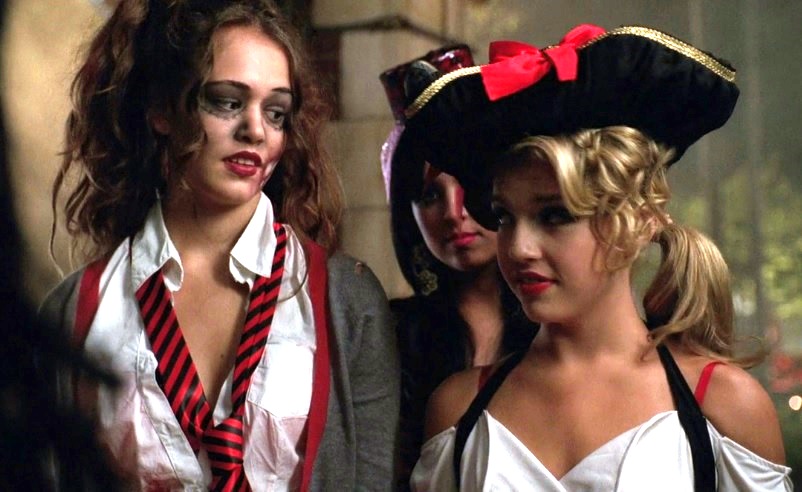 Sex may lead to the creation of life in the real world, but it’s guaranteed to get you killed in a horror scenario.  Especially if you’re a nymphomaniac.  That guarantees that you’ll either screw, or screw in front of, the wrong person.  Half the reason slashers are so damn homicidal is because they can’t get their jollies off the good old fashioned way, so they have to kill the people that can.  Life without sex not worth living, you say?  Fair enough.  You damn well better make sure it’s the best five minutes of your life then, because it’s also going to be the last.

This isn’t a knock on gun ownership.  When you’ve got some merciless killer baring down on you, hell yes it’s good to have some firepower!  The problem is when you let it fool you into thinking you’ve got the problem solved.  If a gun could take down this undead fuck who’s set on turning your skin into a new dress, don’t you think someone would have taken care of the problem a long time ago?  Odds are that the bastard is either going to be on you before you even know he’s there, or that a bullet will have about as much stopping power as a spit wad.  The gun might be great to buy you a few moments, so don’t waste them talking smack to what you think is a dead freak.  He ain’t dead.  Now he’s just pissed, and you’ll be wishing for a bullet yourself once he gets started on you.

Unless your name happens to be John  Rambo, Chuck Norris, or mother-fuckin’ Blade, do not fool yourself for a moment into thinking that green belt you got in Taekwondo or the five lessons of Krav Maga you have under your belt make you bad enough to step up to some maniac with the Strength of the Damned.  It doesn’t matter whether you just got done watching “Rocky” or not, YOU CAN’T TAKE HIM.  Oh, you had a montage segment worth of training?  Wonderful.  That will go nicely with the five minutes of you getting torn apart like you were the wet tissue paper the Killer just wiped himself with.  Come to think of it, he will probably use what’s left of you for just that purpose after he’s munched on his next victim. Don’t be the mother fucker always trying to ice skate uphill.

And finally, above all else, even if you ignore everything else I’ve said –

Now you could make the argument that all of the traits previously mentioned could qualify as someone being an asshole.  Not particularly.  See, you can be a skeptic, a nympho, or a cocky bastard and still be a genuinely nice person.  No, I’m talking about being that sonuvabitch who feels the need to shit on those weaker than himself, that likes to torment others for no other reason than he can.  You know what  “Slashers” really are?  They’re cautionary tales.  More often than not, they ended up where they are because they got beat down by some smug prick who couldn’t be bothered to treat them like human beings.  One horrible accident or demonic possession later, THEY’RE the ones with the power.  The prey become the predator.  And they ALWAYS go after the asshole first.

So there you have it.  Maybe you’re not the strongest, or the smartest.  Maybe your survival experience is only based on how many hours you wasted playing “Call of Duty”.  That doesn’t mean you can’t be the one to make it out in the end.  Keep your head down, play nicely with others, and don’t get too cocky, and you have a definite chance of making it to the sequel.

Of course if you make it to the sequel, you’re fucked.  NOONE ever survives the sequel……..

Wise words or utter bullshit?  Sound off below……